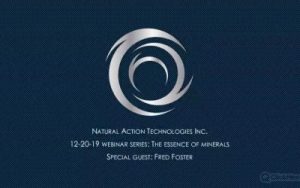 An interview with Fred Foster: The Origin and History of Minbiotics The Natural Action Webinar series Welcomes Mr. Fred Foster This months webinar features an interview with the man who brought Minbiotics to the United States.  After an illustrious career as an educator, founder of multiple private school systems, Fred went on to use his computer background and worked for the likes of Bendix and General Motors as a programmer before he was forced to retire when he became crippled by body wide arthritis. During his retirement, he learned about an atomic scientist working to remove radioactive isotopes with a natural mineral base.  It turned out these minerals were also effective at detoxifying the body while supporting the immune system.  He was able to heal himself fully in a relatively short period of time. He now has devoted his life to sharing what he has learned in the last 9 years, speaking to hundreds of thousands of people about the contamination of our environment and what people need to do to protect themselves from these dangers.

Continue ReadingWebinar – An interview with Fred Foster: The Origin and History of Minbiotics

No comments to show.